“As ever in the run-up to a Bond movie’s release, we’ve heard as much about Spectre’s sponsors as its stars.” - BBC October 1st, 2015 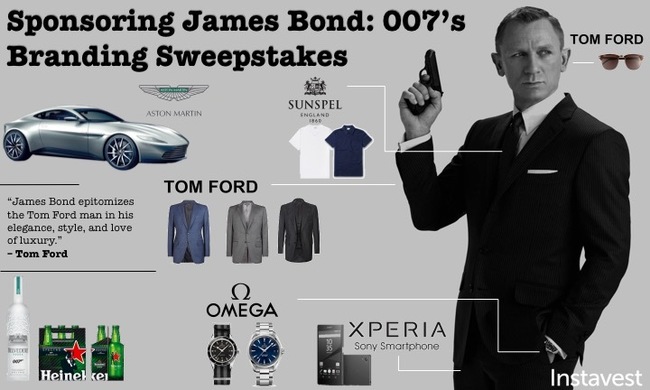 Marketing effectiveness has been known to be notoriously hard to track. A 2015 study by Adobe (NASDAQ:ADBE) stated that nearly 80% of companies consider themselves ineffective at measuring mobile ROI and 92% unable to determine ROI from their social media. The flip side of that is branding - A Wall Street Journal article stated, “To a large extent, many companies are defined by their reputation. A good reputation and a strong brand allow companies to stand out in crowded markets.” For luxury brands, their brand may be their most important commodity.

Enter the world of James Bond. 007’s movies attract some of the most aggressive promotions in the movie business. The latest Bond film, Spectre, had a budget of $350 million - advertising partners cover a large portion of that cost and help to promote the movie worldwide. James Bond has special value, with brands dishing out top dollar to be associated with the timeless character. GQ magazine’s recent feature on everything Bond is wearing shows the magnitude of influence.

“Show us a man who doesn’t want to dress as slickly as James Bond and we’ll show you a liar.” - GQ

Many of Bond’s sponsors are iconic brands. In Spectre, he sports an Omega wrist watch - a Seamaster Aqua Terra, along with a custom made Seamaster 300. Like Omega, Aston Martin has invested a great deal in being associated with Bond, providing Daniel Craig’s character with his spy-vehicles. The partnership highlights the importance of brands to the Bond franchise: “The pages of Ian Fleming’s novel Goldfinger — the author’s seventh James Bond novel—are where the enduring romance between 007 and Aston Martin was born. In his bestselling 1959 book, Fleming wrote that his debonair, hard-as-nails British spy drove an Aston Martin DB3 while driving through Europe on the hunt for notorious villain Auric Goldfinger”

Historic British brands such as Sunspel (Bond’s t-shirts and undergarments) and Crockett & Jones (Bond’s shoes) have been fitting Bond for years, and have seen benefit in their association with the franchise - Sunspel’s site states, “The Sunspel name has been synonymous with the quintessential style of James Bond ever since we tailored one of our original polo shirts for Daniel Craig to wear in his role as 007 in Casino Royale.” Others, such as N. Peal, who sponsored the turtle neck Bond wears in the movie’s poster, saw the product sell out almost immediately. The value is certainly there.

But how competitive is it to win the Bond branding sweepstakes? Heineken (AMS:HEIO) covered 1/3 of the total budget of Skyfall and launched a $100 million campaign with Daniel Craig ahead of the release of Spectre - at the very least, over 24 million people watched the advert on YouTube. They’re joined by Belvedere (EPA:MC) and Bollinger Champagne to round out Bond’s drink selection, in what is estimated to be quite an expensive endeavor.

One company that’s taken advantage of sponsoring James Bond is Tom Ford. The designer has been the tailor for Daniel Craig during his run as Bond, providing suits, jackets, shirts, and even sunglasses. The brand has experienced unprecedented growth in recent years, with many reports associating that growth with the promotion through 007’s films. Tom Ford himself stated that, “I could not be happier to be dressing Daniel Craig as James Bond again in the upcoming film, Spectre. James Bond epitomizes the Tom Ford man in his elegance, style, and love of luxury. It is an honor to move forward with this iconic character.”

How would James Bond invest his money? We’d argue he’d want to replicate the world’s best investments. Find out how at Instavest - request access today.

Over the last few months, I’ve had the opportunity to observe seasoned investors up close. This has significantly changed the way I view investing in the stock market. Here’s what I used to hold true, what I now believe and why my... Continue →