The root problem with conventional currency is all the trust that’s required to make it work. The central bank must be trusted not to debase the currency, but the history of fiat currencies is full of breaches of that trust. Banks must be trusted to hold our money and transfer it electronically, but they lend it out in waves of credit bubbles with barely a fraction in reserve. We have to trust them with our privacy, trust them not to let identity thieves drain our accounts. Their massive overhead costs make micropayments impossible.

A generation ago, multi-user time-sharing computer systems had a similar problem. Before strong encryption, users had to rely on password protection to secure their files, placing trust in the system administrator to keep their information private. Privacy could always be overridden by the admin based on his judgment call weighing the principle of privacy against other concerns, or at the behest of his superiors. Then strong encryption became available to the masses, and trust was no longer required. Data could be secured in a way that was physically impossible for others to access, no matter for what reason, no matter how good the excuse, no matter what.

It’s time we had the same thing for money. With e-currency based on cryptographic proof, without the need to trust a third party middleman, money can be secure and transactions effortless.

When internet adoption began to take off in the 1990s, it came with skeptics and an endless series of questions. In 1995, Newsweek published an article titled “Why the Web Won’t be Nirvana,” stating:

“Visionaries see a future of telecommuting workers, interactive libraries and multimedia classrooms. They speak of electronic town meetings and virtual communities. Commerce and business will shift from offices and malls to networks and modems. And the freedom of digital networks will make government more democratic.
Baloney. Do our computer pundits lack all common sense? The truth is no online database will replace your daily newspaper, no CD-ROM can take the place of a competent teacher and no computer network will change the way government works.”

20 years later, similar headlines are emerging about Bitcoin – from “A Prediction: Bitcoin is Doomed to Fail” (New York Times) to “Bitcoin’s Financial Network is Doomed” (Washington Post). But Bitcoin today is more akin to the internet in the days of ARPANET, not in the age of the early web browser or even Usenet. The Bitcoin whitepaper introducing the theoretical concept was published in 2008, just after the financial meltdown that crippled Wall Street. The latest version of Bitcoin Core available is 0.11.0. In the words of Marc Andreessen, “It’s just early, it was early when everybody was super excited a year ago, it’s early now, it’ll be early next year.”[1]

Much of the skepticism is fueled by tweeting commentators that have placed a magnifying glass on Bitcoin’s developers and early adopters. Perhaps it’s due to the over $800 million in VC investment that’s poured into the digital currency space. [2] Or that the market cap of Bitcoin is hovering around a not-insignificant $4 billion. Perhaps it was Silkroad or Mt. Gox. Whatever the reason, a sizeable gap has emerged between public awareness of Bitcoin and public understanding of it.

Bitcoin and the banks: #

It can be argued that Bitcoin’s original intent was to disrupt the banking system that is entrenched in our global economy. To understand the magnitude of this system’s dominion, let’s consider some numbers:

A significant portion of those profits are driven by areas Bitcoin is poised to tackle by allowing for secure, instant peer-to-peer transactions at zero to low cost. And doing it without any central authority or banks. Nobody owns or controls it. Hence its most notable characteristic: decentralization.

Many others have described use cases for Bitcoin at length. From international money transfers to micropayments, its utility is being showcased around the world. Looking beyond this, Bitcoin emerging as a global network is one of the most exciting developments. The folks at Stripe wrote about this in detail, mentioning that “one exciting consequence of having a network of gateways built on top of Bitcoin is that they’ll all be technology-driven companies in an open ecosystem” – essentially creating an IP layer for payments.

What is not as widely discussed is how Bitcoin will impact investing and capital markets. Currently, there are several layers and parties involved in clearing a trade, much like there is in a credit card transaction, including:

Moreover, large financial institutions are able to take advantage of a centralized model, requiring a middleman for every transaction. This advantage extends to sophisticated trading institutions and many other incumbents that are able to derive benefits from the large pool of assets under their management.

Earlier this summer, NASDAQ announced it would be using Bitcoin’s underlying technology, the blockchain to drive its new private share-trading market. This technology can begin to make trades significantly faster, and save a significant amount of collateral and settlement costs – some estimate up to $20 billion in savings by 2022 [6]. Running trades off the decentralized blockchain would also begin to reduce risk, as well as create additional liquidity. A new start up, SmartContract, is already building products utilizing this technology to create so-called “trustless agreements” that can securely facilitate a variety of transactions. The Secure Assets Exchange is just one example.

It is worth noting that 2014 marked the first year time in the past 5 years that annual bank profits fell. [7] This happens to coincide with a rapidly emerging fintech revolution - over $3 billion was invested into the fintech sector in Q4 of 2014, across 214 different deals. [8] A number of savvy banks have set up their own incubators in an effort to evolve and/or from fear of having a number of their profit lines rendered insignificant. While mass adoption of a digital currency may take some time, a number of innovations have made dents in the financial services arena, much to the benefit of the everyday consumers. 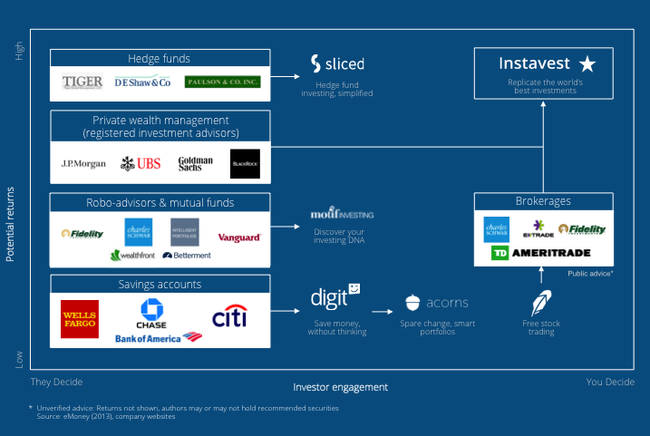 Personal investing is just one sub-set. Other companies such as Venmo, Boku, and Moven are examples of start-ups making dents in the way retail banking is conducted. It is unsurprising that many of the underlying principles that drove Bitcoin’s development are becoming prevalent, in bits and pieces, in many of the innovative start-ups mentioned above. Peer-to-peer transactions. Zero to low fees. Adaptability. Ease of use. Secure transparency. And perhaps most importantly, taking subtle steps towards decentralization.

While the world waits for Bitcoin to mature into what the Wall Street Journal dubbed as “one of the most powerful innovations in finance in 500 years,” [9] these other technologies, apps, and products are providing powerful and effective alternatives to traditional options. This is, undoubtedly, a good thing.

Sign up for Instavest where you can replicate the world’s best investments.

45 years ago my dad left everything in India to move to the U.S. Legend has it that when my dad landed at JFK International Airport, an immigration agent asked “Hey kid - where are you headed?” To which my dad replied “Michigan!” “How... Continue →