Bitcoin has hit mainstream. Despite this, basic questions still remain - is it a currency or a commodity? Will governments support it? Will the banks eventually use it?

Bitcoin has been mired in debate since it’s inception. In August, within the developer community, a debate about Bitcoin’s architecture took place, and Bitcoin XT was born as a fork from the original project.

What’s certainly true is that Bitcoin has been extremely volatile, with many people around the world buying them on pure speculation that the price will rise. After breaking $1000/ BTC at the end of 2013, Bitcoin fell below $200/ BTC just over a year later. In the past month, it’s price has surged, breaking $400/ BTC for the first time since over one year ago. The problem is, it’s very difficult to predict Bitcoin movements or even identify the source of price fluctuations.

While it only tells bits and pieces of the story, we’ve laid out some of the key events that have impacted Bitcoin over the past 2 years, and how its value has spiked and fallen during that time period. 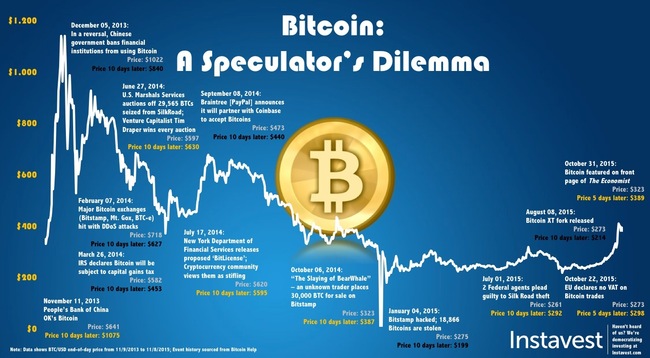 P.S. If you missed it, see our post from this summer on Bitcoin and it’s impact on fintech startups

Haven’t heard of Instavest? We aim to democratize stock market investing by creating a network of great investors who share their ideas with unprecedented transparency. Request access today and get $50 as a bonus!

Sports betting vs. Daily Fantasy - Aren’t they both just gambling?

Much has been made of Daily Fantasy Sports sites in recent weeks, most recently highlighted by the New York Attorney General announcing that sites such as FanDuel and DraftKings are illegal based on state gambling laws. Sports betting... Continue →